Höch is known as the pioneer of the photomontage, alongside fellow Dadaist and her lover of seven years, Raoul Hausmann (1886-1971) (after she could no longer stand his domestic abuse she left him to be with a woman) . In time, she has come to symbolise, the concept of the ‘New Woman’ that emerged after the First World War. She can be thought of as the ‘It girl’ of her time; artistic, intelligent and fashionable.

Höch’s rise to artistic acclaim in the history of art was a slow one.  Due to little mention of her career and personal life by her male Dadaist colleagues she seemed to be forgotten amongst them. A comment by artist, Hans Ritcher, that Höch was a “good girl” with a “slightly nun-like grace” had a detrimental impact on her reputation. Despite her engagement with the Berlin Dada, a movement that emerged from the uncertainty of World War One, she was discreetly segregated because of her gender. 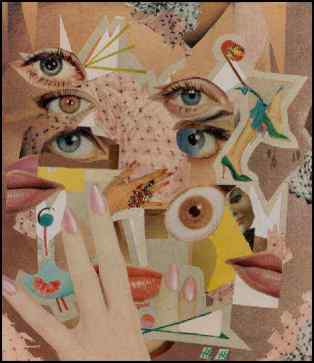 Born to a German upper middle class family, Höch enrolled in Berlin’s School of Applied Arts in 1912, originally studying glass design and later studying at the College of Art and Crafts where she was introduced to the avant-garde art scene. This was where she experienced her preliminary exposure to male domination in the art world, whereby she was steered away from painting and sculpture (the ‘male’ mediums), and worked in craft where she would learn the techniques for her later art practice of collage. Soon after in 1916 she came into contact with Berlin Dada through her burgeoning, stormy affair with the married Raoul Hausmann.

Dada was a movement that originated in Zurich, Switzerland in 1916. The artists were intuitively antagonistic towards the bourgeoisie and its art. Their aim was to provoke an emotional reaction from the viewer.

Her works like ‘Cut with the Kitchen Knife’ made in 1919 (above), unveils an umbrella of her interests which describe her political input in the art world. The work is a montage composed of images from different magazines and newspapers, juxtaposed in size, colour and position. The complex montage is arranged into four quarters interpreted by art historians; the Anti- Dadaists in the top right corner (described by the newspaper writing, ‘Anti-Dada’), the top left represents ‘Dada Propaganda’, the bottom left, ‘Dada Persuasion’, and the bottom right section of the work is ‘Dada World’. Each quarter unites representatives of the old and new German government such as politicians and state figures. Famous female figures and other public people such as Lenin, Einstein are included. This represents her deep concern for her country and the world she was living in.

Cut with the Kitchen Knife is a work that showed her opponents that she was not simply a female artist working in craft. She used her craft and turned it into something much more powerful.

A special mention to my two Art History teachers Miss Siem and Miss Spelman, who introduced me to so many female artists and how they contributed to a male dominated art world.

And to my art teacher Alice Woodroffe who continually inspired me.